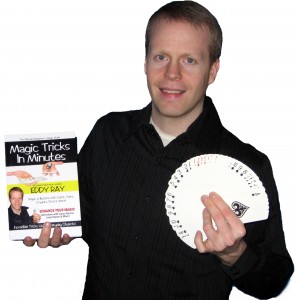 Lancaster PA,Magician Eddy Ray has been astounding people from the U.S.A. to the far reaches of Japan with his incredible and artistic sleight of hand, hilarious interactive audience segments, and his fresh approach to performing magic and illusion.

Eddy has won numerous awards including 4th place at the Tropicana Hotel & Casino in Las Vegas, Nevada. He was selected to compete at Talent Rock, which was founded by music impresario and entrepreneur Lou Pearlman. In 2008 & 2009 Eddy Ray was asked to audition for America’s Got Talent on NBC. Eddy also is an accomplished author with two magic books available for sale worldwide. He also is the star of over 10 best selling magic instructional DVD’s designed to teach other magicians sleight of hand magic and techniques.

Eddy also starred in and produced his own television series called “Magic Town” along with making appearances on other television and radio shows across the country performing his unique blend of magic and illusion. Eddy has performed in every venue imaginable and continues to entertain corporate and public audiences worldwide.

Unlike other magicians in Lancaster, Eddy Ray is fully insured and a full time professional magician. He is the only certified magician in town and is a member of the Certified Magic Professionals and Certified Magicians Network. Strict criteria is required to become a member of this organization including interview with past clients, show reviews, professionalism, and experience. Don’t take any chances by hiring a magician or entertainer who performs magic shows as a side hobby or in their spare time.. Real questions to consider are… Will they show up? Will they provide an entertaining show? Do they have the experience necessary if they only perform occasionally? Stay stress and hassle free with Eddy Ray, Top Magician and Family Entertainer!